I’ve seen some mixed emotions about this show, but personally I thought it was very good. I felt that the themes were well executed, though the time travel aspect may not have been focused on as much as I would have liked, and the ending left me with some questions still.

The basic concept is that Naho Takamiya, a high school student, received a letter telling her about a tragedy that would be taking place that school year. It had been sent from herself ten years in the future, warning her of the decisions that could be the cause of the tragedy taking place.

The letters gave her the specific events that would occur that she needs to change, and although she didn’t always do as the letter told her, she made an effort to listen and change the future.

Personally, I liked all of the main characters. I thought that their wide range of personalities fit with the way the show was paced. Like most shows, each character had their own defining trait, Naho being shy, Kakeru being reserved, Suwa being athletic and confident, Hagita being intelligent, Takako being polite, and Azusa being outgoing. The dynamics worked well enough.

One main complaint about this show I’ve seen is the dialogue and the impracticality of the way the characters reacted to situations. I will agree the dialogue sometimes got a little cheesy, and some moments, you wanted to pick the character up, put them where they need to be, and tell them exactly what to say. But I feel there are a lot of shows I truly enjoyed and still enjoy that had some of these flaws.

You ready to hear my true problem with this show? After this will be only positives, so get ready for my negative.

The way the “time travel” was explained. Honestly, it wasn’t. You see throughout the course of the show, their teacher explaining the theory of multiple universes with different outcomes (It reminds me of Steins; Gate with that one), but nothing more than that. We the viewers just need to accept that this is the theory that is reality in the world of this anime, and that the letters sent to the characters was done through this thought in mind. The future versions of our main group somehow remembered this lesson from ten years ago, and went with it. The letters were sent, and I feel I can say this without it being too much of a spoiler. There really aren’t many ways to send a letter in the past. They somehow found a black hole in their normal Japan, and stuck them in. Don’t ask me how, this was literally the only explanation.

Okay, I’m done with that. The only other thing bothering me is the lips of the art. But that’s minor, I got used to it.

Positives! It was an emotional ride. I sometimes like it when a show brings me to tears, because it tells me just how much I care about these characters. It honestly isn’t a bad thing in my eyes. Some shows not even meant to be sad have made me cry. But anyway, there were plenty of feel-good moments, and plenty that made you want to curl up in a ball and cry, like I did.

The relationships within the show were pretty developed for how many main characters there were and how short the show was. By the end of the show, all of them grew closer together because of what they went through together to stop the tragedy from happening.

And, of course, there was a romantic tension between the two main characters: Naho and 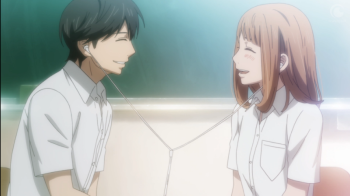 Kakeru. Of course, they have some cute moments, I’m not going to lie. They really never move further than being close friends, which honestly is for the better. The show would have lost sight of the end goal if they began focusing on their romances.

The letters had told them about something that was going to happen to Kakeru, and they contained some of the events that occurred that could have led to this happening. Naho manages to change most of the events, and in turn, hopefully changing the future. She isn’t perfect though, and becomes too nervous to fulfill the duty she was given in the letter. Some say this was a flaw in the anime, that she didn’t do what the letter blatantly told her to do, but in my personal experience, I would have done the same thing as her in some situations. I don’t consider myself to be a social butterfly, in fact, I’d be the total opposite. I too have thought I could do something, but when the time came, chickened out or couldn’t manage to open my mouth to say the words I wanted to say. I’m on Naho’s side with most of

Something I love about this show is that they made depression and anxiety a major theme throughout. This is something I personally suffer from, so it was a bit refreshing to see it heavily influencing the plot in a show. Kakeru has been inflicted with a serious form of depression even in the beginning of the show, and he has a difficult time dealing with it. Naho seems to have a sort of anxiety, due to her fear of saying something wrong, so she says nothing at all. The other members of the group can see that they are dealing with some serious problems, and try their hardest to support them.

Overall, I thought this show was strong with its characters and themes, though some of the specifics were lacking. I definitely feel you should experience it, even if just for the talk of serious mental problems many people suffer from. I appreciate that a show like this exists.

Thank you for reading my review! I haven’t posted in a while, sorry about that. I’ll try to be more consistent from now on.