I wore this cosplay on May 20th, at Detroit’s Motor City Con. It’s not completely done, but this is the base. I’ll be completing the mask and fur cloak for a later con, but this was what I was able to complete for now. I thought it turned out pretty well, and it’s fairly comfortable. The boots I got were a bit small and hurt my feet, but that’s not too hard to avoid. And I made this entirely without other tutorials, which I’m quite proud of.

I started by going to Goodwill and Salvation Army for these pieces, and I found exactly what I needed, minus the boots and craft materials. The dress I got was not exactly what I’d had in mind, but it worked fairly well and what I didn’t like was covered by the shirt. The dress was easy to

prepare, the only alterations I made was cutting some holes and slits into the bottom. It was kind of fun to do this part, since it didn’t matter what technique you used. As long as it looks tattered, you’re good to go. The shirt, on the other hand, gave me some issues. I started by trimming the collar, hem, and sleeves off. From there, I ran into some troubles, this being my first project I sewed by myself. I had some difficulty pinning the sides together to make it fit me, but with some measurements and marks with a pen, it turned out quite nicely. You want to overlap the front onto the back and sew a small section at about mid-rib. This will give it the look of a tunic. From there, I cut some holes and slits in the side and smudged some red face paint to make it look like blood.

For this cosplay, you need earrings, armbands, a necklace, and a headband. It’s quite jewelry heavy, which was strange for me because I almost never wear any. To make this much jewelry, though, it must be light. The closest craft supply that looks like bone is clay, but you have to get the air-dry kind, or it will be much too heavy and difficult to shape cleanly. I use Crayola Model Magic, which was also used for the eye piece on my 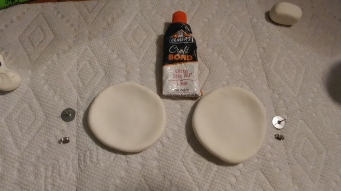 scythe in my Maka Cosplay. I am in love with this product, and has been the biggest help in my cosplay experience.

So, the earrings. You need clay, earring backs (I got a pack of 10 for like a dollar), adhesive, paint, and Mod Podge. For the earring itself I took a small piece of clay, rolled it in a ball, and pushed my thumb in the middle, fanning it out. If you’ve ever made a clay cup in art class in elementary

school, you probably know the technique I’m talking about. Although you only want a slight lip on the edges. If it looks rough, that’s just fine, it is supposed to be made of bone after all. From here, paint the whole piece with some off-white acrylic paint. I used an ivory color. When it dries, coat it in Mod Podge. Though I used glossy Mod Podge, matte would work well also. When that dries, adhere the back to the top of the earrings. If your earrings aren’t completely circles, just pick one of the longer sides. The glue I use is called Elmer’s Stix-All, which has been another miracle. It sticks to nearly anything, much like E 6000, but without the stink.

The necklace I also made with clay, and took more time than the earrings, not surprisingly. You will need leather cording, clay, paint, Mod Podge, and a skewer. I ended up making 6 teeth and 5 beads. The teeth I took a medium sized ball of clay, rolled into a sort of snake, pushed one side into a flat surface, and smoothed the rest to a point. From

there, I used the skewer to scratch some cracks into the clay, to make it look more worn and rugged. I then poked holes into the top of each tooth, and then ran a small paintbrush handle through it to enlarge it. I then painted them with ivory acrylic paint and brushed some glossy Mod Podge over them. Again, matte would be fine as well. The beads were much easier. Small balls of clay, pushing each side into a rectangular box. I kept the points smooth because it looked better this way. Used the skewer for holes, then

the paintbrush again. I couldn’t find any black or navy blue paint at the time, and I didn’t have the patience to buy more, so I used dark brown, which worked just as well. After this, Mod Podge again. String them on the leather cording, tooth, bead, tooth, bead, until complete. Make sure three teeth are pointing one way toward the middle, the other three the other way, so all are facing the middle. I tied my necklace rather than adding a clasp, which works just fine.

The armbands and headband were a bigger challenge. For me, at least. When beginning them, I wanted to sew them all, but didn’t have the correct needles or thread, so the armbands had velcro on them. For these you will need thick elastic, blue felt, Elmer’s Stix-All, Velcro pieces. Measure the elastic to fit your bicep. I did it close-ish to my

shoulder. Cut the elastic and apply the Velcro, preferably with the Stic-All. The sticky Velcro does not stay. Make sure it still fits before proceeding. From there, cut three circles from the felt. One will be used for the headband later. To cut the circles, I actually used that little plastic piece that comes on Ramune soda with the little plunger attached. The bottom was the perfect size and I’d just happened to not throw it away haha. When the circles are cut, use the Stix-All again to attach them to the elastic. Armbands done! Now for the headband. When I initially measured the elastic for this, I’d forgotten about my wig which has a much larger circumference. So, I didn’t wear my wig for this cosplay. Luckily, my hair is short and 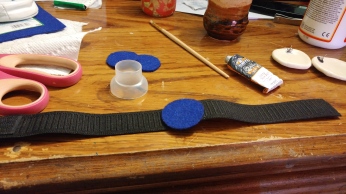 brown so it wasn’t entirely necessary. So, I sewed the elastic together for the headband, since I was scared the Velcro would get stuck in my hair. The circle in the front at the base is the same as the armbands, but I added a gem. But, I didn’t have any gems at the time so I made my own. I had some gray craft foam, which I cut into a circle using the other side of the Ramune lid, and covered one side in hot glue. I waited for it to dry, then cut off any pointy pieces of glue. I then painted it with silver paint and attached it to the felt once it dried.

This was done last minute, yes. I finished this two days before the con. I would’ve waited longer, but I would be busy that day so I did it the Thursday before. Lucky for me, I had some PVC piping left over from my previous cosplay, and it was

the exact length I needed! I spray painted it with brown, which took nearly 5 coats. (Tip: don’t buy the cheapest spray paint it doesn’t work so nice, it drips like crazy and sticks to the cardboard you’re working on even after it’s dried) Needless to say, it was a nightmare. I did it though,

and all was well. When it was ready, I used white craft foam to cut out a spearhead shape. I did this freehand, but I’m sure there’s a template out there. I was on a tight schedule. When they were cut out, I cut four slits in each head. I cut two small, thin rectangles and painted them red. I thread the pieces through the slits, so it looked like a piece of leather thread through. I painted the rest of the head ivory, and coated it all in Mod P 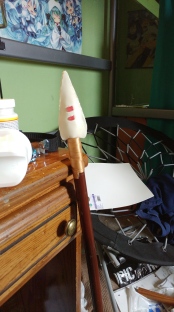 odge, matte this time. As before, glossy would also work. I ripped some newspaper up and stuffed it in between the two pieces to form a bubbled out shape. As soon as this was achieved, I hot glued it shut. I painted the hot glue ivory as well, to match the rest of the head. I pushed the bottom through the hole in the PVC piping and hot glued at the base. Taking the light brown ribbon, I wrapped it around the base to cover the hot glue and glued a bit every once in a while until a nice amount had been wrapped. Done! Yeah, it isn’t the greatest, kinda flimsy, but it was alright. I don’t exactly recommend this method if you’re intending to use this cosplay a lot.

The rest it all pretty basic. I got a face paint recommendation from a friend who’s been cosplaying for years and has done full body paint. And I would recomm

end this brand to others. I got a large amount of face paint for around $8 on Amazon. All you do is add water and stick your brush in, and have at it. I used a small concealer brush, since it gave me control and even coverage. To draw the triangles, I used parts of my face as markers. The forehead I started by going a bit further from my eyebrows, drew to the middle, and adjusted if I needed more. To remove, just use more water and a Q-tip or tissues. It may smudge, but you’ll get a good amount off. For the cheek ones, I started at my cheekbone at the middle of my eye, then drew out to the edge of my eyebrow, then met it at a point at my lower lip. Again, anything over the line can be wiped away. I didn’t get time to mess with my wig, since I’d never done it and I was a bit rushed for the cosplay. Instead, I used a bobby pin to push my bangs back to make the headband go on smoothly.

Sorry for the lengthy post. It took me so long to finish this, I had most of it done a week ago, but I had a busy week last week and had to wait to finish it until I had time. Luckily, it’s now done. Weekends have been hectic the past few weeks, between work and family, so we’ll see how this goes. Thank you for being patient with me!

And on tumblr! @eegghhh (I just post some writing stuff and thoughts. You’ll see a lot of likes on Yuri on Ice fanart)