[OWLS Blog Tour: “Dreamers”] Nobody Wants to be Forgotten: Noragami

Hello! I’m back for my fourth blog tour with OWLS!

This month’s topic was a tough one. This month we are covering characters who have dreams, or goals, but fall short of meeting those goals, due to some sort of force stopping them. We’re calling those characters dreamers.

I thought long and hard about this one, but the answer was staring me right in the face. And I mean literally, I realized how perfect it was when I looked at the poster I have from this anime hanging on my wall.

Anyone who has been following my blog for a while knows how much I love and have talked about Noragami. It was one of those that stuck with me, and I still love it to this day. The artwork, the characters, the soundtrack, the fight scenes, the sentiment, all are this perfect blend I will never forget. And it has some pretty comedic moments as well.

I have also read some of the manga, but I’m going to stick to the anime for simplicity. And I’ll mainly focus on season one for minimal spoilers. There are two minor, vague spoilers of season two, but they were necessary for my points. Unlike most of my posts with OWLS, this one doesn’t require full knowledge of the source.

Though, I want to talk about one character in particular, Yato. Even if you haven’t seen this anime, you may know who Yato is, as he’s generally the face of this show. He’s really not the main character, but the title, Noragami, stray god, is referring directly to him. And I feel he defines a “dreamer” fairly well.

This show focuses on Japanese gods, some directly from Japanese beliefs, and others made specifically for the manga/anime. Yato is not a real Japanese god, but he interacts with some who are.

At the start of the show, Yato is shown wandering along the street, searching for a child’s stray cat. This is what he does as a god. He spray paints his number on walls and train stations, hoping someone will need help with an odd job. He only charges 5¥, or 5¢ for my fellow Americans, for these tasks. With the money he makes, he’s hoping to save up enough money for a shrine, so he can be a real god. Since he was a child (I’m not exactly sure how gods age in this world, but it shows flashbacks of him looking maybe five years old), he’s dreamed of having a big shrine, and millions of followers to praise him for his good deeds.

The problem: he’s invisible to much of Japan. You mention his name to someone off the streets, there’s a 99% chance they will have no idea who you’re talking about.

Yato was born a god of calamity. His sole purpose in the world was to bring disaster for people. He was a sort of hitman, I guess you could say. He would get jobs to kill people. He was content with his purpose for roughly a thousand years, until the present day of the anime. Something changed in him to make him realize he could bring something better to this world than ending people’s lives.

In the days of his killing, he had a companion who doubled as his weapon, Nora. She is also a stray, as that is exactly what her name means. When Yato left Nora, she became angry with him, and constantly tries to bring him back to his old life. She thinks his new goal of being a good god and bringing joy to people is ridiculous, and she does everything she can to bring him away from his dream.

Though, there are plenty of characters who help Yato with his goal. Hiyori, a girl who can shift between the human world and the god world, Yukine, his new weapon (regalia), Kofuku, the goddess of poverty, and her regalia, Dikoku. All of these people do what they can to help Yato in his mission, but even with their help, it’s hard for Yato to come close to that vision.

I Don’t Want to be Forgotten

I should probably talk about the title of this post, huh? The largest problem with Yato becoming a real, popular god is that people tend to forget him almost instantly. They hire him for a job, but the next day they’ll forget all about who it was who did that job for them. This becomes a huge problem between Hiyori and Yato, since Hiyori is a human still and can forget gods. If Yato is gone for more than a week, her memories of him become spotty. It’s terrifying for Yato, because if there is a time where nobody remembers him, he’ll have no use in the world and will disappear. He knows he must desperately hold onto Hiyori, no matter what, but sometimes his desires for popularity get the better of him.

He has so few followers, unfortunately, and this is constantly on his mind. If only he were to return to his calamity days, he’d be remembered. He considers the option multiple times through the two seasons of the anime, and almost falls under the temptation fully. He’s in a dangerous spot between remaining with the people he’s close to: Yukine, Hiyori, and Kofuku; and rebelling against everything he’s worked for to return to his old ways with Nora. Does he fear being forgotten more than his desire to achieve his dream? I think he does.

The Weight of a Name

This is a slight spoiler from Noragami: Aragoto (Season 2), but it’s a huge point I’d like to mention. Yato is not his real name. It was not the name his father, a powerful figure in the godly world, gave him when creating him. His true name is Yaboku. This seems somewhat minor, but it holds a lot of weight to his character.

He changed his name to hide his past. To move on and reach for his big dream. Anyone who knew the god Yaboku would never hear the name again. That god was dead. Yato now existed, his purpose the same, to perform undesirable deeds for others. But he was oh so different. Just as his name is.

When written in Japanese, Yato and Yaboku look the same, but depending on what form of Japanese it is, depends on how it’s read. So, kanji or katakana. Same symbols, same purpose. Different reading, different dream.

What Makes Yato a “Dreamer”

At the point of the ending of the anime, and even how far I’ve read in the manga, Yato has practically no hope of becoming this big, famous god. Heaven hardly acknowledges his existence. They don’t invite him to anything, and he doesn’t have any sort of recognition the other gods have. Nobody prays to him, so he doesn’t receive the tokens people buy for other gods. He has nothing compared to them.

That on top of his 5¥ fee, he will never have a big shrine, or millions of followers, or people tending to his every whim.

But this isn’t all that bad. The gods who have those things have reputations to uphold. There are certain things expected of them. Yato doesn’t have that. He finds joy in just scrubbing people’s showers and finding their lost cats. He loves to be around Yukine and Hiyori. Another small spoiler, Hiyori actually makes Yato a mini shrine, with his name on it and painted and everything. Knowing he’s loved by just her and the others who do believe in him should be enough. 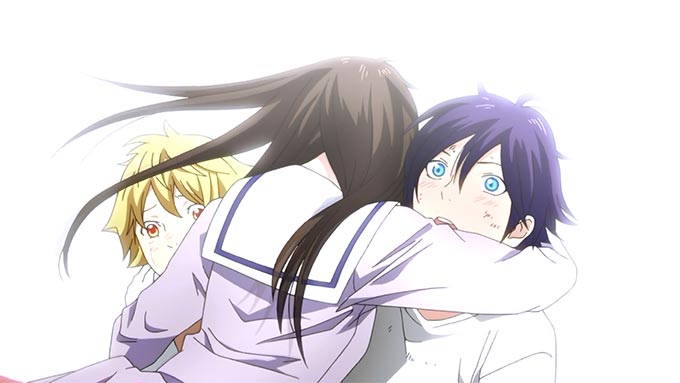 It’s nice to dream about fame and fortune, but sometimes all you need is right in front of you, as it is for Yato.

This was quite a fun one! I was so worried at first that I wouldn’t have something to talk about, but this was perfect! I’m so glad I got to explore this show again, it’s been quite a while since I’ve touched it. If you haven’t seen this show yet, get on it. It’s a fun ride, and the art is just gorgeous.

Make sure you check out the other posts this month too! Before me was Stephanie from Anime Girls NYC and after is Irina from Drunken Anime Blog, so make sure you go read theirs too.

For my regular followers, I’ll be posting a little bit of something special next week. I haven’t done this in a proper post since I started my blog, and I’m excited to share with you! For those only here for OWLS, I should be back for next month’s tour!

Hope you enjoyed this, as I did.